As lockdown restrictions begin to ease, Andy Bailey, the knowledgeable beekeeping hero who supports our hives at the Rough Close Works farming estate in Derbyshire, has reported that the bees are continuing to do well in these highly unusual times.

Here’s a report of his latest findings for June:

Another month of 2020 has flown by and I’m pleased to say that all the colonies at the EPC-UK hives are doing well. Each has expanded, and importantly the two nucleus colonies that I started off in May are flourishing, with both having been successful in raising new queens. One has expanded to such an extent that I have had to move it into a full sized hive from the initial nuc box. This itself poses a challenge:

It’s all about location

Bees are hard-wired to recognise their surroundings and importantly their hive. I am sure I have mentioned before that bees map out the area around their hive – up to a three-mile radius.

So when moving a colony beekeepers typically use the rule of thumb ‘less than three feet a day or more than three miles’. Simply speaking, it means that if I moved a colony six or ten feet for example from its original location, the bees would not find it and would go back to the location the hive was in previously.

However, if they are moved more than three miles away, they will consider the area to be all-new terrain. The foraging bees will then perform an orientation flight and zone in on their new location, before returning safely to the hive. 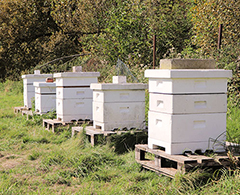 To achieve a three-mile move successfully, the foraging bees will need to have died out and a new generation that has never seen the old location needs to be active. A worker bee’s life is around 60 days at this time of year, however it’s foraging activities take place for no more than a month. This means keepers need to leave the hive away from the original site for at least a month, if not more, to realistically achieve a successful relocation.

Now I have re-housed the nucleus colony into a full hive, I make sure that I move it about three feet closer to its intended destination each time I visit the apiary. By the time I write July’s Newsletter I should have just about completed the move process. 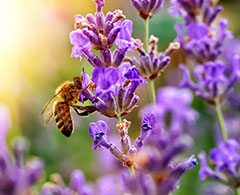 Concerns for the queen

Only one of the colonies is causing me slight cause for concern. I noticed a couple of visits ago that the queen, despite being only one year old, was slow at laying. At this time of year she should be laying up to 2,000 eggs a day. This queen is laying far from that, and the majority of the brood that are hatching appear to be drones. This is an indication that the queen is running out of steam and that she probably did not mate very well on her mating flight last year. That could have been due to the weather, or she may have hatched too early or too late in the season, presenting her with fewer drones to mate with. Ordinarily, she would mate with around 12 drones, however on a very productive mating flight she may mate with up to 40. Unfortunately this particular queen is not performing. 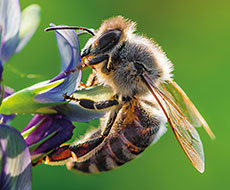 However, the bees know when things are not going to plan and I noticed on my last inspection that they have produced what is called a superseder cell. This is a queen cell built halfway down the brood frame – unlike a swarm cell built at the bottom or side of the frame. This tells me that they are not going to swarm; however they do plan to replace her.

So now it’s a waiting game again with that particular colony. Even bees have their own complex politics, with those who don’t perform to the satisfaction of the masses out on their ear! I am hoping that this current run of warm, settled weather continues, as it will give our newly emerged queen (if all goes well) the opportunity to hatch, mate well and return to her colony to produce lots of worker bees with the potential to carry the colony through the winter, which is what it is all about.

The bees notice the subtle environmental changes that we might miss. We have now passed the summer solstice and for the bees the focus is on gathering plenty of stores and producing as many worker bees as they can to accomplish that, thereby ensuring survival during the winter months. 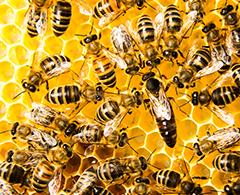