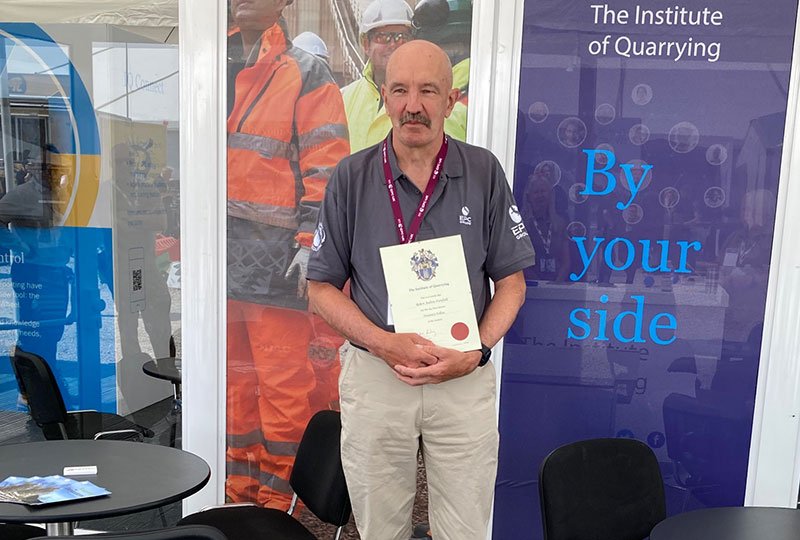 With a level of capability and experience considered second to none within our sector, Consultant Explosives Engineer, Dr. Rob Farnfield has been further commended recently through both an unexpected award presentation from the Institute of Quarrying (IQ) at this year’s Hillhead Exhibition, and a promotion to his new role as Technical Director of EPC Metrics Ltd.

With an evident passion to pass his knowledge on to the talented engineers who will shape our industry’s future, Rob’s newly appointed role as Technical Director of EPC Metrics will see him support others in the field as they solve the challenging, complex and critical needs of our customers’ Drill & Blast businesses using Fly, Monitor and Analyse digitalized expertise.

Adding to this professional accomplishment, Rob has received further accolade through an unexpected Honorary Fellowship award presentation made by President of the Institute of Quarrying, Martin Riley, during the Hillhead show.

Rob’s unsurpassed expertise has been 40 years in the making. Applying the knowledge from his first degree in Mining Engineering, followed by a PhD in the Environmental Impact of Surface Mine Blasting, Rob has gone on to become a Member of the International Society of Explosives Engineers.

Over the course of his career Rob has investigated at length the environmental impact of surface mine blasting, performed as part of the University of Leeds, Dept of Mining Engineering and funded by the National Coal Board. He has also worked as a Lecturer in Mining Engineering at the University of Leeds, and this August marks Rob’s 25th year working for EPC-UK within various technical, explosive based positions. His time with the company has seen him perform the role of Technical Services Manager and Head of Explosives Engineering, working internationally across Northern and Eastern Europe, as well as North America.

Rob has also shared his expertise in a voluntary capacity, performing work for the International Society of Explosives Engineers (ISEE) in the US, and back on this side of the Atlantic, the European Federation of Explosives Engineers (EFEE). He has served as part of the Federation of European Explosives Manufacturers (FEEM) Working Group on Blasting Practice, with a period as Chairman – a role he also extended to the Quarries National Joint Advisory Committee (QNJAC) Working Group on Drilling & Blasting, where over the course of 13 years he developed a series of safety focussed toolbox talks.

Working in the field and on committees, his achievements have helped to rewrite legislation, and see publication of best practice guides that are not only used in the UK, but also considered as a blasting benchmark on a global scale.

EPC-UK Managing Director, Ben Williams, believes Rob’s commendations to be completely deserved, saying: “Dr. Rob Farnfield has a reputation that quite truly goes before him. His work is widely renowned for successfully reducing harm within our industry’s operating environments. His accomplishments have been marked and include the development of EPC-UK’s seismograph technology, together with research into advancing the use of high-speed cameras to improve blast optimisation and ‘planning to comply’ models. More recently his work performed alongside our EPC Metrics’ engineering team has served to develop and progress digital danger zone modelling. Add to this his success in innovating and implementing our hybrid detonator technology – a system now used across the UK explosives industry to make the blasting environment safer and more cost effective – and Rob Farnfield has without question, secured his place as an innovator of our industry’s time.”

“I regard Rob as a highly respected colleague who has come to epitomise EPC-UK’s ‘Innovation’ SPIRIT value, demonstrating this core quality in practice, alongside the supporting principles of Safety, Passion, Integrity, Respect and Teamwork,” Ben continues. “As I look to develop the next generation of explosives engineers, I see Rob as the best placed person to guide me through the process. I anticipate the results we will achieve together, by further instilling knowledge in our team and providing the leadership guidance to build a learning legacy for the industry. Rob’s experience will be invaluable to EPC Metrics, in his role as a technical director, a leader and a guide for our younger engineers. I believe too that he will work as a valuable principal for the company, guiding our business, with myself as director, through the sector’s technological evolution. I know Rob will excel within his new role and nothing gives me more pleasure than seeing his efforts recognised industry wide.”

Worthy of the honour

IQ President, Martin Riley, said: “Rob’s commitment and dedication in supporting QNJAC with his technical expertise is a great example to us all. Undoubtedly his work with the committee has helped make our industry safer.”

Commenting personally, Rob added: “It is always an honour to be recognised for your contribution by your peers. My experience, combined with desire to encourage others to learn and develop, has enabled me to train and support many young engineers over the years. I hope that through my position as Technical Director of EPC Metrics, I will be able to pass that knowledge along to even more young and enthusiastic engineers. Knowledge and wisdom come with age, but can also be lost in corporate memory, so I will continue to impart my technical understanding to not only develop the industry, but vitally, give those in the field the skills to remain safe and effective now and in the future.”