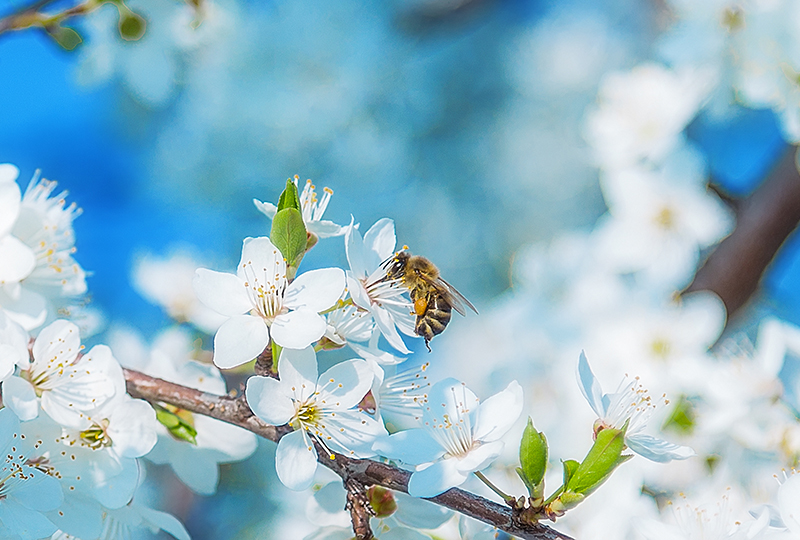 Working as both a guardian for nature and a resident beekeeper keeps Andy Bailey on the go all year round. This month he’s been working up in Glasgow and down in Cornwall meeting a schedule that makes him as busy as the bees at Rough Close Works. Here’s more from Andy about how May has been over at the hives:

This month I have been working with eight hives and five nucleus hives at EPC-UK’s Rough Close Works’ apiary, which has certainly proved eventful. I briefly mentioned the process of creating hive splits and artificial swarms in last month’s diary entry, however now I have had to perform these manipulations on site, so I’ll go into a little more detail about what’s involved.

Bees have a natural instinct to swarm. This isn’t something they do as individuals, but rather as a unit for the good of the colony. In the wild, they will swarm to ensure the survival of the species. The process begins with the scout bees. When the time is right, these location agents will first hunt out a suitable spot for a new home. In the meantime, the attendant bees will stop feeding the queen in the hive to slim her down so she can fly. After gorging themselves with enough honey to last a couple of days, half the colony will head off with the old queen to their new residence. They leave their former home with some queen cells, nurse bees and brood. The new queen eventually emerges, and after a few days she will go on a mating flight, during which she will mate with as many drones as possible before returning to the colony to begin the hive cycle all over again.

However, the downside of this fascinating act of nature for the beekeeper is that a swarm occurrence can lead to the loss of most of a hive’s honey and half its bees.

So, for a keeper to try to stop, or at least delay, a colony’s swarming instinct, there are a couple of tactics that can be brought into play: The first is the ‘artificial swarm’ and the second is ‘the split’.

To create an artificial swarm a keeper needs to have a presence of queen cells in the hive and know exactly where the queen bee is. To enable me to keep tabs on the queens I mark them with a special, harmless coloured marker to make them easier to find.

Once the queen cells and queen have been identified the keeper needs to make ready a spare hive and frames. To do this, the original hive must first be moved a few feet away and the new hive put in its place. The flying bees, who have an amazing sense of direction, will fly into the new hive on the previous spot. The bees actually have the ability to map and remember an area of three miles in every direction from the hive, so if a keeper needs to relocate a colony for any reason, they must move each hive either no more than three feet per day, or alternatively, a greater distance than three miles away.

Now the new hive is in situ, the original frame containing the queen can be transferred along with a couple of frames of brood and food either side, and some undrawn foundation – a base plate made of wax on which bees can build new honeycomb. A queen excluder, and any honey supers are also added, together with the crown board and the roof. All the flying bees from the original colony will now return to the new hive in the old position.

Meanwhile in the original hive, which is now in a new site, queen cells, brood and nurse bees need to be introduced as well as food.  The frames that have been taken out must be replaced with drawn frames or new foundation. A starter colony such as this should be left for about three weeks or so, to allow the new queen to grow and emerge. This typically takes 18 days from a day-old egg. She will then go on a mating flight and all being well will start to lay, enabling two colonies to thrive from the origins of one. Amazing.

This is the method used as an intervention that prevents the bees from feeling the urge to swarm.

A strong colony can be split at least two or three ways and there can be a good chance of split success regardless of the queen’s location within the hive, so long as there are bee eggs, brood and food in both halves.

The half housing the queen will have lost fifty percent of its brood and eggs, so by inserting new undrawn wax foundation, the hive can be refilled, and the bees will keep busily drawing out new comb and trying to grow the colony back up to its original size. The half without the queen will select a few day-old eggs and from them, make emergency queen cells. After 18 days the new queen will emerge, mate, and start her own colony.

This process of artful deception is designed to trick the bees’ instincts, making them believe they have already swarmed. Whilst neither the artificial swarm nor split techniques are guaranteed to work, they do at least buy the keeper some precious time. As you can see from this short swarming clip, I recently caught our Rough Close Works’ bees just in time, as I happened to have sufficient spare kit on site to do the job, and after placing it next to the swarm, they marched in like good soldiers! It’s my hope that we won’t lose too many bees through swarms this year and I keep my fingers crossed for a decent crop of honey.