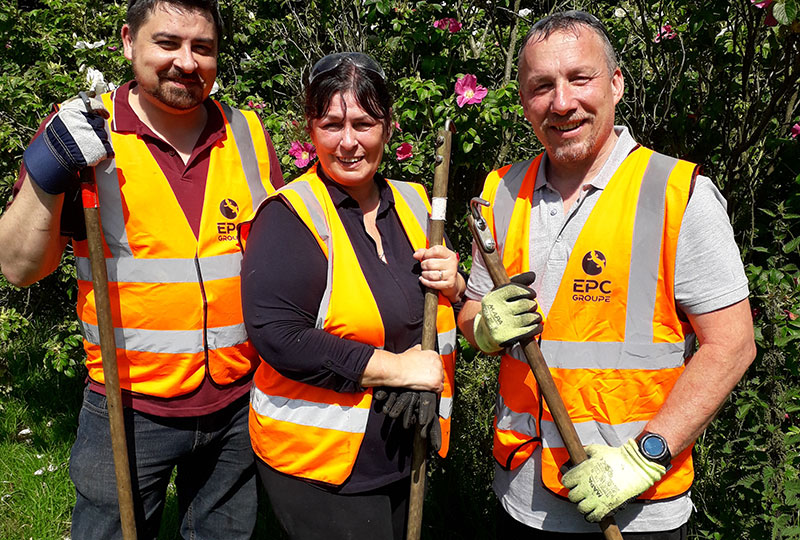 Over the course of a hot, but productive day the team of seven succeeded in clearing an impactful quantity of the Balsam, which whilst attractive, can unfortunately erode riverbanks and cause flooding if its seeds block waterways.

The plant, which is also referred to as Touch-me-not Balsam, and Policeman’s Helmet owing to the shape of its flowers, was originally introduced as an ornamental plant by Victorian gardeners. It’s non-native and fairly invasive and commonly grows near waterways – reaching up to 2.5m in height. It can spread rapidly too, as the 800 or so seeds each plant produces can shoot up into the air and travel up to 7m away.

It’s a pretty annual, however Himalayan Balsam is classed as a problem weed because of the damage it causes to native plants. This is because it tolerates low light levels and takes up a lot of space, shadowing other plants and outcompeting them. According to Section 14 of the Wildlife and Countryside Act 1981, it is an offense in England and Wales to allow Himalayan Balsam to spread into the wild. Therefore, many conservation organisations highly recommend that it is removed from grounds or gardens.

We first became involved with the Trent Rivers Trust back in 2016 when the organisation encouraged us to get involved with its ‘Only Rain Down the Drain’ campaign and adopt river-friendly philosophies within our business practices.

Since then, EPC-UK employees have taken part brook cleanup events along local rivers and brooks and identified outfalls from brooks to the land. We also entered the River Friendly Business Awards in 2018 and won Bronze and Silver Awards – this year we are going for gold!

We hope the efforts we made to reduce the quantity of Himalayan Balsam from the Coppice Brook this summer prove positive and help to prevent the spread of the plant next year and its capacity to invade the brook and surrounding areas.