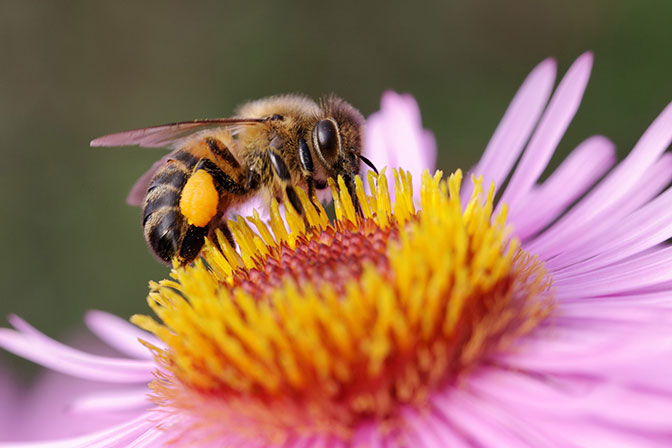 Taking the time to update us from the EPC-UK beehives, our resident keeper Andy Bailey has given us amazing insight into ‘the calendar year of bees’ over the past 12-months. Here’s his latest report from Rough Close Works:

It’s been such a challenging time for so many. With spring now establishing itself once again, it’s also an opportunity for me to look back on past records and reflect on how the hives have fared over the year.

At this point in 2020, we had one very weak colony at the EPC hives at Rough Close Works, which sadly died out with Nosema. By comparison, this year sees us with four really strong colonies and, with luck, the first dandelions of the season will soon be flowering – a sign that I can remove the fondant from the hives that has sustained the bees through the winter months.

Currently, two of the colonies have 2020’s queens at the helm, whilst the remaining two have queens from 2019 in charge. To ensure the colonies remain strong, I will look to replace the older queens by late spring with queens reared this year. Sometimes I do this by splitting the colonies into two, leaving one queen-less and one with the old queen. The queen-less colony soon realises it is without its leader and selects two or three, day-old eggs from which to create new queen cells. They feed the cells with Royal Jelly and in sixteen days the new queen will hatch. Theoretically the first queen to hatch will sting the other un-hatched eggs, leaving just one new virgin queen to head up the new colony. She then has a maximum of twenty-one days to mature, mate and start laying herself.

The best made plans…

In practice things rarely go according to plan. Often more than one queen cell is left, which runs the risk of each hive swarming with a small cast of bees, and leading the stock of bees to become depleted. Even when leaving just one queen there is still an element of luck required, as after hatching she will take six days to become sexually mature and will be dependent on the promise of good weather for survival. From day six onwards, if the weather is fair, the bees will usher the queen out to go on a mating flight. If a bird doesn’t eat her, she will mate with as many drones as she can before returning to the hive. We then have to wait a further couple of weeks before we know if we have a laying queen.

If we have been successful in our manipulation and the new queen is laying, the old queen can be removed from the original hive, leaving that hive queen-less. We can then either let the bees go through the whole process again, or unite the two colonies to create one strong colony with a new leader.

I have enclosed a video clip of a couple of the colonies on their winter fondant so you can see what life is like currently in all the hives.

Taking a look at all the options

There are other ways to introduce a new queen to a colony. One of the quickest and most reliable methods is to buy a new queen and introduce her after removing her predecessor. Queens cost upwards of £40, however the purchase does save lots of time and removes the element of risk to some extent. There is always a chance that the new queen will not be accepted and is killed by the colony, so each method has its perils. I tend to perform a mixture of methods, as buying a queen from a specialist breeder ensures good stock moving forward and introduces a different bloodline – but more on that note later in the year.

The colonies at Rough Close belong to a Social Enterprise Company called The Good Bee Company (TGBC). Although TGBC have been ticking along in the background now for a couple of years, they are actually officially launching the company this April. One project that they have been working on is a joint enterprise with solar farms. There are a number of well-known companies such as Low Carbon, Green Coat and Octopus Energy that have agreed to have bee hives on their solar farms and, as such, one of the hives from Rough Close will be soon leaving for Lincolnshire to join another of the GBCO hives at a solar farm owned by Octopus Energy.

If you drive past or visit Rough Close you will see that the hives there are white in colour. You will soon notice that the hive destined for Octopus will be replaced with a brand new blue hive prior to its departure. I will select a colony with a 2020 queen, take all the frames of bees out one-by-one and place them in the new hive. The day before they are transported to their new home, I will visit late in the evening – when the bees have stopped flying for the day – close up the hive, and put it in my car. The following morning it will arrive at its new location where the bees will be opened up and, after orientating themselves, will start work pollinating the Lincolnshire countryside. I will build up the stock of bees again at Rough Close as I did last year, hopefully nurturing up to six or eight hives depending on the weather and the productivity of the new queens.

Until next month, keep safe and well and I wish you all a Happy Easter.

Ben Williams, Managing Director, EPC-UK comments: “It’s incredible to think that a hive of bees, so diligently nurtured and cared for by Andy at our Rough Close Works site, is going to be relocated to Lincolnshire where its expert pollinators will go on to benefit nature there.  We’re extremely pleased that the EPC-UK site has succeeded in offering the right conditions for the bees to be strengthened and relocated to other corporate beehive projects, as part of a wider and highly effective conservation strategy.”