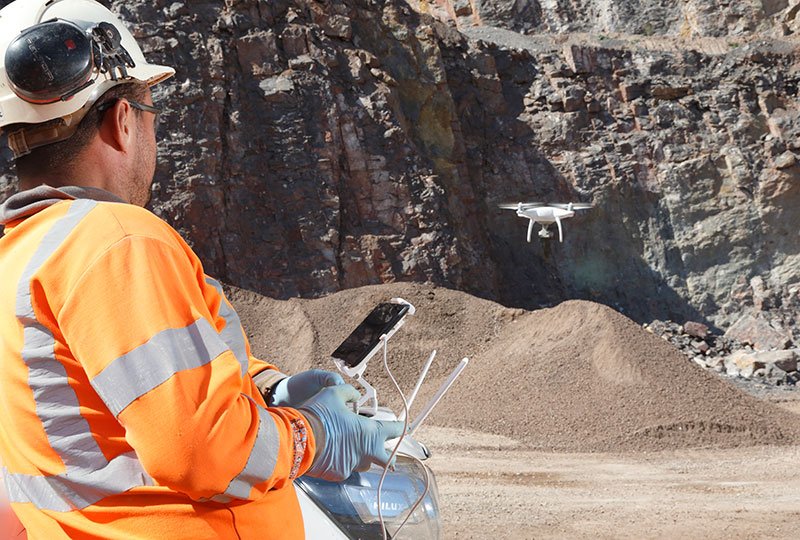 During this year’s Hillhead Digital exhibition, EPC-UK’s Dr. Liam Bermingham took to the online stage and delivered his presentation on the ‘Digitization, Evolution at the Interface Stream’; covering key technologies and techniques put in place to improve quarrying operational efficiencies by focusing on drilling and blasting.

Liam Bermingham is a graduate from the University of Leeds and has completed a degree in Mining Engineering and a PhD in The Prediction and Control of Air Overpressure that Arises as a Result from Quarry Blasting. During this period Liam co-wrote and presented several published technical papers for international drill and blast journals and conferences. He then worked for 3 years as a blasting consultant specialising in the environmental impacts of blasting, before gaining valuable practical experience working in quarry operations in roles including shotfirer and in quarry operations management. Liam joined EPC-UK in 2019 and has been working in his current role as Explosives Engineer since 2020.

Detailing the new possibilities to digitally measure, store and analyse data throughout the entire drill and blast process – from surveying and design, to measuring the resulting blast performance – Liam’s presentation for Hillhead Digital explored how a digital quarry, alongside mobile and fixed plant telematic systems, can significantly impact productivity, effectiveness and, most importantly, safety.

Here are the highlights he presented in detailing the latest technology EPC-UK is using to implement a fully digitalized quarry operation:

The way quarry companies operate is now being transformed by digitalization, from autonomous surveying practices to pre-planning of drill and blast activities through to developments in business software. These enhancements in technologies are driving increased efficiencies across the whole industry. With these improvements and implementation of technology we’re able to accurately measure, record and analyse performance data in all sectors of the quarrying operation, from the drill and blast, the load and haul and the crushing and screening processes. By being able to utilise the KPIs that we record on site we can monitor and review blast performance and the real effect it has on a quarrying operation.

By collecting this data accurately, the correct decisions can be made and implemented to reach the desired goal for a particular site.

The latest tools and technologies 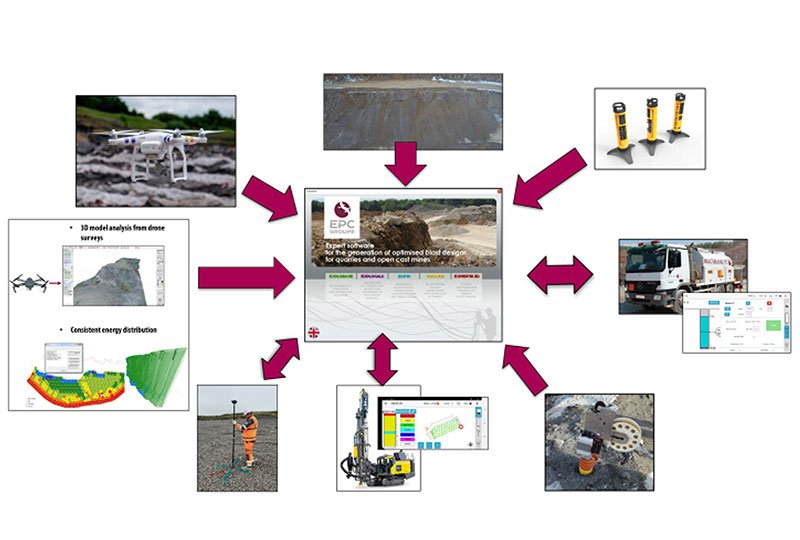 We’ve developed our own inhouse advanced blast design software called ‘Expertir’.  Expertir is an integrated, highly advanced drilling and blasting software package that combines multiple streams of data, achieved using a range of technologies including GPS, hole probing and drone photogrammetry, which together can create complex blast designs. Producing a 3D map of a site, Expertir allows our engineers to generate precise pre- and post-drill profiles together with accurate timing plans – producing the most optimised blast performance.

We carry out GPS RTK (Real Time Kinematics) surveys in conjunction with our drone surveys to improve the accuracy and use an application called ‘Expertab’ to record all drilling information and to monitor and record the hole loading process of a blast. This data, as well as information recorded after probing holes, can be fed directly back into the Expertir software.

We can also now remotely fire using electronic detonators from a safe location outside a danger zone and perform a variety of post blast analysis using drone technology to create 3D models of a muck pile, which are then fed through fragmentation analysis tools.

All this key information is inputted into our online cloud-based database called ‘Explore’, from where we can look at and analyse all the data together. However, we also need to analyse the drill and blast data in conjunction with key information currently recorded on site.

Combined, these Key Performance Indicators provide an indication of blast performance; for example, improved loading times at the face suggest improvement in fragmentation, a decrease in fuel usage of face excavators or front-end loaders will also indicate improved fragmentation, as does increased crusher throughput and percentage of split materials scalped off at the primary crusher or oversize in the muck pile.

Results from all these KPIs help us make the correct decisions for future blast designs.

Safety levels are heightened significantly across all quarry operations as a result of implementing drone technologies.  Using photogrammetry techniques, the drones – which are piloted by specially trained operatives outside the danger zone – perform face profiling surveys comprising a series of overlapping high resolution photographs from known locations. Together these create an accurate 3D model of the area, which can also be geo-referenced using GPS. The benefits for face profiling using drones are multiple: It’s safer, meeting with EPC-UK’s core value of prioritising safety, as face profiling can be achieved from a controlled position – usually on top of the bench.  The whole process improves accuracy, the geological conditions can be recorded, and the information imported straight into Expertir.

The drone face profiling technique enables us to obtain measurements from behind obstructions, such as toe bunds where laser profiles can be ineffective. This profiling is also faster than traditional laser profiling surveys in situations where multiple set-ups would be required. 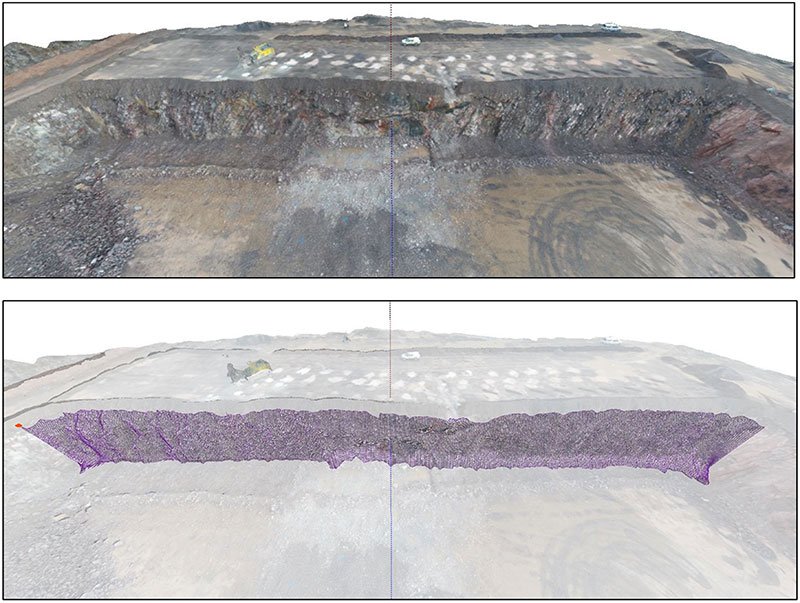 The resulting 3D model from the pre-profile survey using the drone is then fed directly into our Expertir software package. This is then used to calculate the profiles for that particular survey and by using the inbuilt blast design algorithms, automatic generation of blast hole locations can be achieved, in order to fully optimise the energy distribution throughout that blast. We can automatically position the holes exactly where we need them, before going to mark out, or to drill.

This information is then directly fed onto the Explore cloud-based platform, from where it – together with all the parameters of a particular blast – can be downloaded by the driller onto the Expertab application. 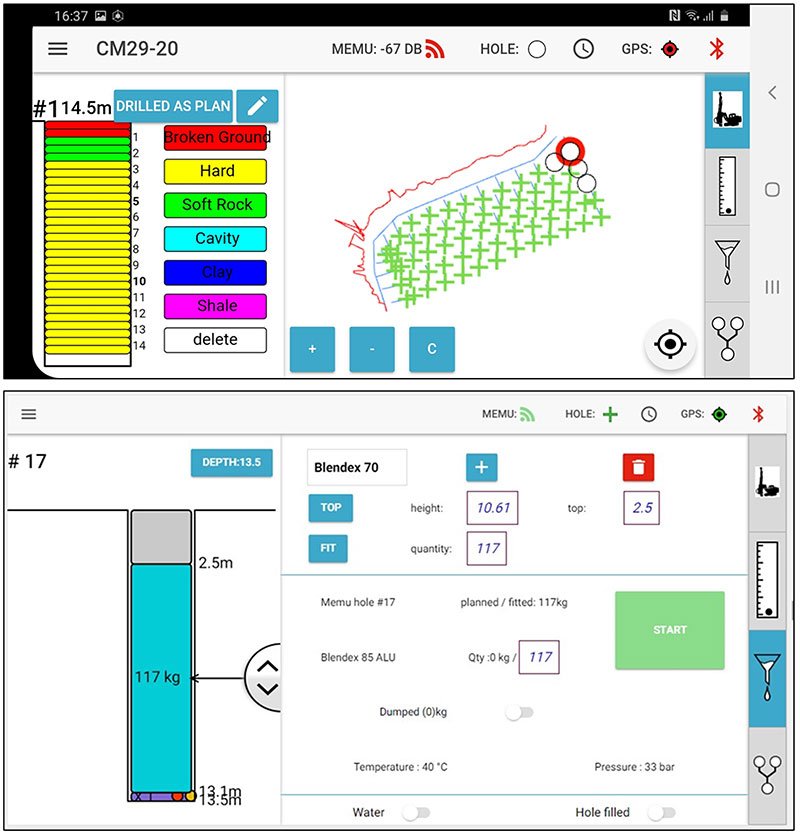 Digital drill logs are generated and stored onto the Explore platform, and digitally recorded drill logs are then uploaded to Expertir for the final blast design.

Once the blast has been fully designed, it is re-uploaded to Expertab and accessed by the bulk truck operator using a tablet. Via inbuilt Wifi on the MEMU, the tablet connects wirelessly to the bulk emulsion truck’s control system and controls and records the entire hole loading process. This information is fed back into the Explore platform once the blast has been completed.  As well as digitalizing the drilling process, we are also capable of digitalizing the hole loading process as well.

Performance monitoring of a blast

We are now able to fully utilise drone technology to monitor and review the performance of a blast and can make use of its high resolution 4K video cameras to record it. The high-resolution video camera is a great tool for reviewing the blast, but it doesn’t allow us to quantify its performance.

However, by applying the same surveying techniques used during the face profiling stage, we can use a series of photographs and create a 3D model using a drone. We can import a 3D profile of a muck pile into specialist fragmentation analysis software. The software can calculate the size distribution present in that muck pile, which can generate a fragmentation curve and from that model, work out the percentage of undersize and oversize created by the blast.

All this information can be uploaded to the Explore platform to help us generate blasting KPIs and to enable full analysis of a range of blasting parameters and their effect on resulting performance. By centralising the data, we can analyse the blast performance data as a whole and not in isolation, allowing for more efficient decision-making in the future.

The technology presents us with the ability to quantify blast performance, however, to determine the real effect of the blast on a quarrying operation, we need to look at the data in conjunction with KPIs recorded throughout various stages of the quarrying process.

Site performance data required includes load and haul data and crushing and screening data as these two processes are directly affected by the drilling and blast operation.

In terms of the load and haul process, measuring KPIs can provide a true indication of a blast’s performance. Such KPIs include, but are not limited to, loading times at the face, payload distribution, fuel usage, machine usage secondary breaking and repair and maintenance costs of a load and haul fleet.

In addition to the load and haul performance we also need to analyse the processing plant performance of a site. The KPIs associated with this phase of a quarrying process are more commonly recorded, these include primary crusher throughput, energy consumption of the primary crusher and percentage of scalpings.

By looking at all this information combined, we can now quantify the true impact of the drill and blast phase on an actual cost of the quarrying operation and identify the improvements that can be made.

The Digital Quarry Project illustrates how recording and analysing all this data together can benefit a quarrying operation and its running efficiency.

“The EPC Way” Digital Quarry Project, is a programme created by EPC-UK in 2018 with the aim of implementing and developing the latest technologies and applying them to a live UK quarry. This project has allowed us to realise the possible benefits, not just to the drill and blast process, but also to the overall quarry operation and its performance.

After implementing Drone and GPS surveying technologies, GPS navigated smart drill rigs, staggered patterns and auto hole layout generated by using Expertir, data showed that the power consumption of the primary crusher reduced by 0.13 kWh per tonne (850 mWh per annum) and a 5.7% reduction of scalpings – materials that could be retained at the primary crusher. We also saw an improvement in the product split with an increase in 11.5% going through the primary crusher, so fewer scalpings and less oversize. 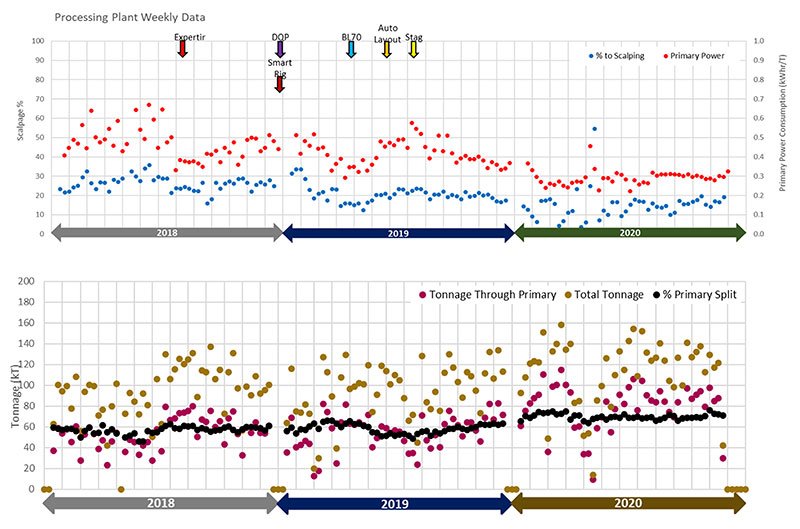 Overall, the results have shown an improvement in blast fragmentation which has led to a ‘tightening’ of the particle distribution curve as well as higher throughput and a lower percentage of waste material.

It truly shows the benefits that can be achieved by accurately recording, measuring and analysing all relevant data – not just drill and blast data – but load and haul, processing and plant data together.

To conclude, it is now possible to fully digitize the blasting process using the latest technology. By accurately measuring and analysing blast performance using drone technology, data recorded for mobile plant telematic systems or other load and haul KPIs and performance data related to the mineral processing phase – such as primary crusher performance data – significant improvements can be achieved: