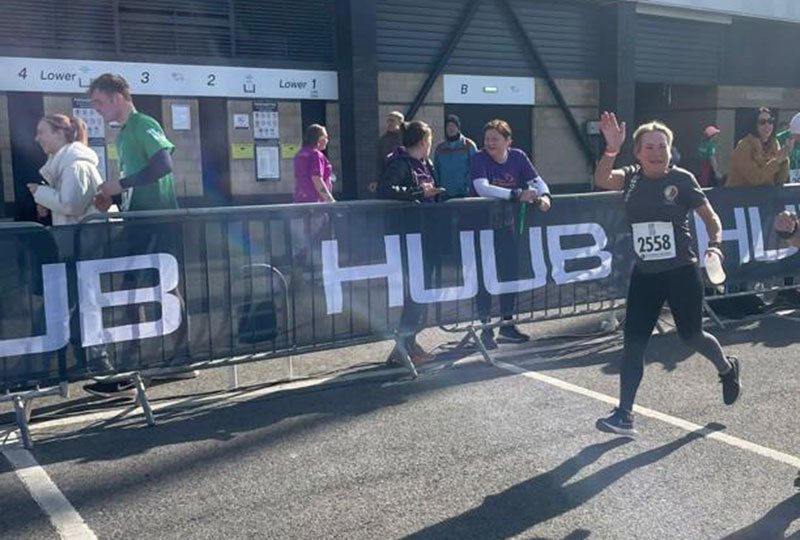 Back in 2018, PA to the Commercial Director, Shelley Totty was notably impressed when EPC-UK launched its inspirational Commit to be Fit programme; an initiative introduced by Managing Director, Ben Williams to encourage employees’ physical and mental wellness and support the SPIRIT values that centre around looking out for one another across every area of our business.

It’s been four years since Ben’s concept began supporting bodies and minds at EPC-UK and the programme is still going strong, particularly as a means of encouragement for those who have found exercise and prioritising the importance of wellbeing challenging for various reasons during lockdown.

Having benefitted from the programme herself, Shelley talks to Onsite about her experience of getting back in shape, and the future her improved level of fitness now, excitingly, has to offer. She explains:

“Rather than simply being a momentary idea that offers limited support or success, Ben’s ‘Commit to be Fit’ programme continues to be valuable to so many at EPC-UK. Whether someone needs encouragement to take on a fitness regime for the first time or support in trying a new activity to help improve mental health, the programme helps to instil employee confidence and solidarity, so everyone can work towards achieving their personal goals and encourage others to do the same.”

“I’d recently joined the company when the scheme started and was among the first employees to be given a fitness watch, rucksack, and water bottle. New to my role, it was great to see that I was now working in a team where mental and physical wellbeing was prioritised and its importance valued both in and out of the workplace. I was instantly on board with the initiative and used the equipment and company support provided to take a running routine more seriously.”

“Whilst I’ve always enjoyed exercise and feeling fit, I hadn’t previously focused on running. At school I ran the 100m and was a fast short runner, rather than someone with the enthusiasm to run long distance. However, inspired by Ben’s programme, I decided to try ‘Ilkeston Joggers’ 3 years ago, when a friend asked if I could offer my fitness camaraderie, and join her on a running programme called ‘Couch to 5K’. She didn’t have much exercise experience, was slightly overweight and lacked the confidence to join a running club alone, so in the SPIRIT of ‘Commit to be Fit’, I offered her the support EPC-UK had shown me, and we signed up together.”

Shelley adds that Couch to 5K is run by Jog Derbyshire, a network of 40 friendly, social jogging groups that cover the length and breadth of the county – from the far tip of the High Peak to South Derbyshire. “There is even a group that runs in Alfreton and Somercotes where our factory and offices are located,” Shelley says. “The groups offer programmes for everyone – regardless of age or ability. Even complete beginners are warmly welcomed, so think about giving ‘The Joggers’ a try and see if one of the groups could be right for you,” she says. Jog Derbyshire | shift-together.co.uk

Diary note: The Ilkeston Joggers meet on a Wednesday night at 6:15 p.m. at Tesco Ilkeston. There is no cost involved as all the Jog Derbyshire Leaders offer their time and support completely free of charge. The Joggers also meet as part of a Sunday morning group at 8:00 a.m. where those looking to keep fit can embark on either a 5 or 10k run. Shelley has been attending these sessions since they started and tells us that she’s “absolutely loving it.”

“Prior to Covid, running in my spare time gave me extra energy at work and helped me to feel happier and more focused in general. However, when lockdown hit, meeting with Ilkeston Joggers had to be put on hold. Unlike my friend, who had been working at home and continued running to give her time away from the house, I had done the reverse, and stopped running during that challenging period. I spent my free time preparing to move house, so when I did finally get my trainers back on, I found getting my fitness back up to its previous level tough.”

Getting back on track

“By this point, social distancing restrictions had eased, and Ilkeston Joggers had been able to start up once again. I was back with my running teammates, and it was great to have that much-missed company again, however my friend who initially had been less fit was now performing better than me.  That was the point where I felt the most unfit I had ever been, and I was annoyed at myself. I became determined to get back to a place of physical and mental wellbeing. Together, the EPC-UK ‘Commit to be Fit’ initiative and the support from the leaders at Joggers have helped me to achieve just that. EPC-UK even supported the running group by sponsoring an advertising package. By feeling encouraged by others I am now fitter and healthier than I have been in a long time. Importantly this makes me happier, as I know I’m caring for my own wellbeing as well as that of my friends and colleagues, which all ties in with the EPC-UK SPIRIT values of respect, passion and teamwork; working together with commitment for the good of everyone on the team.”

A passion for progress

Before lockdown Shelley made great strides by entering and completing a charity run for Brain Cancer UK. With her fitness regime now back in motion, she has succeeded in becoming a registered Co-Leader for Jog Derbyshire and plans to complete her official Leader training later this year. She ran the Derby 10k back in April and the Locko Park 10k earlier in June. Shelley also aims to complete her first half marathon in 2023. In the meantime, she’s continuing her running achievements by entering the Smalley 5 Bells 10k in July and the Goose Fair Gallop 10k in October.

“I’m delighted to learn about Shelley’s incredible fitness goal progress and her dedication in returning to the ‘Commit to be Fit’ programme, so she can improve both body and mind,” said Ben Williams, Managing Director. “We’re here to support all employees with their physical and mental aspirations in and out of the working environment and look forward to hearing more about Shelley’s achievements as she realises that all important half marathon ambition.”

For more information about the EPC-UK ‘Commit to be Fit’ initiative contact Julie.Wootton@epc-groupe.co.uk