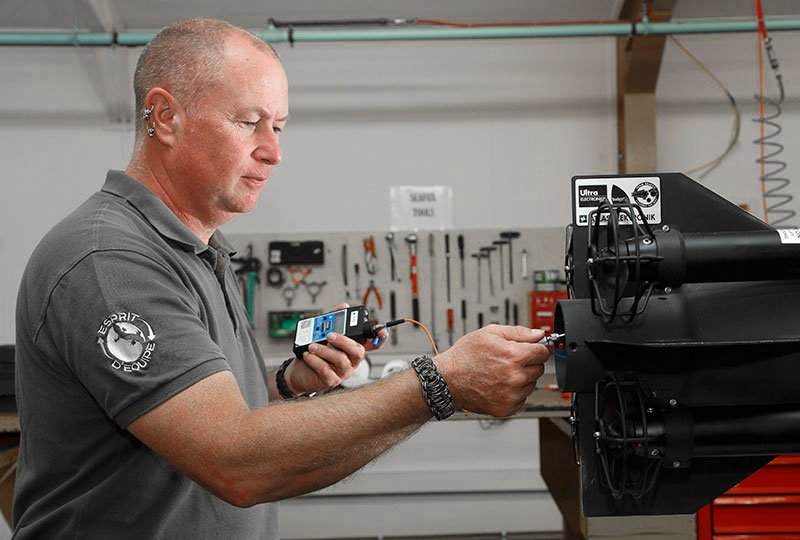 Heartfelt congratulations to our Bramble Island Explosives Technician, Eric Pettitt, who recently marked his 20th anniversary of starting work as a trainee technician for EPC-UK.

Eric joined us back in 2001 having gained previous chemicals experience working as a chargehand for a plastics company. He demonstrated his potential early on and was soon asked if he’d like to accept a work opportunity in Germany to learn how to assemble and integrate Seafox drone technology; safety equipment that’s used around the world to help clear sea mines.

Eric stayed for a week’s training to begin with, but then returned to the German site on a further three occasions to advance his knowledge and development. Soon, his role progressed to implementing the same technology locally with the drones and testing them before delivery to naval bases across the UK.  Fast forward to the present day and with that experience in his professional competence, Eric now works within the team that services and repairs the Seafox drones back at Bramble Island, supporting a re-lifing programme to insert new batteries and mother boards into pre-existing equipment.

Once back in the UK and working in our defence activities again, Eric extended his expertise yet further. He began spending periods on the Demil range in 2006, safely deactivating and destroying various types of explosives from fireworks and slurries, to out of date flares and shaped charges used in the oil industry. He was also involved in the provision of training and relevant explosive supply at the facility, namely for the Police explosive method of entry teams.

Eric has also had challenges to face during his time at EPC-UK. He suffered a serious bicep injury back in 2017 and underwent specialist surgery. The procedure involved the insertion of a Titanium pin into the bone, which the bicep was then attached to. The operation was a success, however the nerve damage endured meant that the back of his hand has remained numb.

Following the surgery, Eric had three months off work. When he returned, he was allocated light duties at Bramble Island and subsequently trained in security, giving him the skills and confidence to provide cover for sickness and holidays.

While working in security he was given an opportunity to support teams in the labs as an assistant, testing raw materials and final products. He also trained to operate the asbestos monitors and take samples for analysis, in addition to working on the calibration of lab equipment and making titrants.

Eric came back to the defence and logistics activities in 2018 and has picked up where he left off, working on the Demil range and Seafox operations. Since joining the defence team again, he’s continued his journey in safety and security systems through his involvement in the testing of X-ray scanners for airports.

An enthusiast of the outdoors, Eric owns a small wood, which in his spare time he likes to use for air rifle target practise and family camping with his wife Nicola and daughters Laura and Eloise.

“I don’t know if I could name one highlight of my time here with EPC-UK,” he says, “but if I had to pinpoint the best experiences, I’d say working on specialist delivery systems has been rather special and going on a Royal Navy minesweeper is not something you do every day!”

“I have been here for twenty years and feel that I have been looked after by the company and treated as a trusted member of the team, with more functions than a Swiss army knife.”

Ben Williams, Managing Director adds: “We’re delighted to recognise Eric for his two complete decades of service. We’ve benefitted from his skills, enthusiasm, perseverance and adaptability and consider him to be a truly valuable member of the team. We thank him sincerely for everything he continues to bring to each role he undertakes.”