Training for heroism – we’re helping Grant along his Lifeboat journey 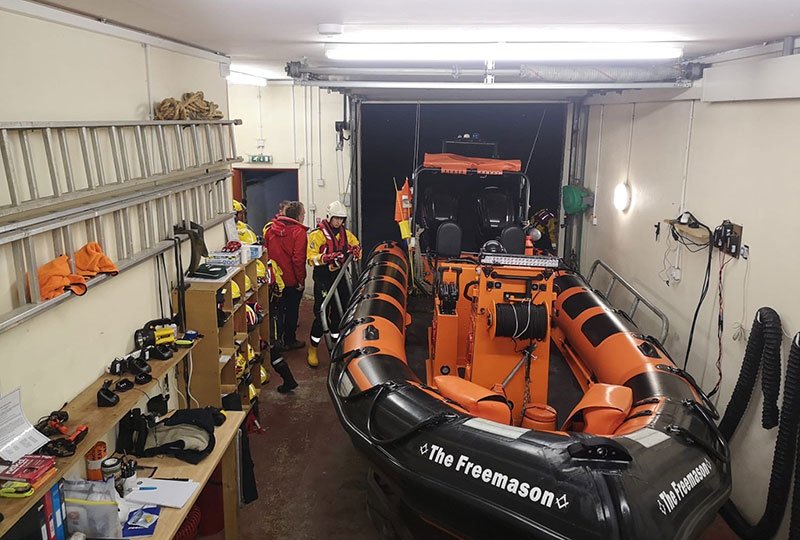 Supporting our employees with personal charitable endeavours has always been part of the way we work at EPC-UK and has helped us to shape the SPIRIT ethos we’ve become renowned for. Revolving around Safety, Passion, Integrity, Respect, Innovation and Teamwork, the SPIRIT ideology reflects our operating values, as well as our place and responsibilities within our wider communities.

So recently, when one of our Carmarthenshire-based drillers, Grant Holder became a member of the Ferryside Lifeboat, we were only too pleased to assist him with a financial contribution towards the essential equipment he’d need to fulfil his new role.

Having lived in Pendine on the northern shore of Carmarthen Bay since childhood, Grant harbours a lifelong love of the sea. Together with his partner Alison and two children he moved to a new home near the bay in Ferryside in September – just a few minutes walk from the local lifeboat station.

A village-based team with a history that stretches back more than 175 years, Ferryside is one of over seventy inshore lifeboats stationed around the British Isles that operates independently of the RNLI. A HM Coastguards Search and Rescue ‘declared facility’; the lifeboat is equipped to respond to 999 calls and is run by crews who train together every week, at sea and on shore.

With a keen understanding of the vital service lifeboat teams provide, Grant says:

“I’ve always felt an affiliation with the sea and enjoy my free time spent on the water, sailing and water-skiing; however my experiences have helped me to understand just how easily and quickly a dangerous and potentially life-threating situation can arise.

“With my knowledge and connection to the sea, joining the lifeboat team ‘down the road’ seemed like a natural decision that would enable me to help anyone in the water who may encounter difficulties.”

Grant details the involved training exercises he’s been undertaking on a weekly basis, which focus on teamwork, technical competence and safe operating procedures.

Covering everything from boat-handling, search and rescue, and navigation, to radar training, radio communications and casualty care, he and his crew regularly practise rescue scenarios involving other emergency services such as the Coastguard and Fire and Rescue, and develop their capabilities to perform hovercraft operations.

“It’s vital to become proficient across all elements of the lifeboat training process,” he continues, “which costs in the region of £1,000 for each crew member – with the price of protective clothing and kit added on top.”

EPC-UK has donated £500 from its charity fund to support the cost of Grant’s essential kit. The sum has contributed towards his new dry suit, life jacket and helmet.

Our company Managing Director, Ben Williams, was delighted to learn of Grant’s courageous undertaking, sharing that:

“Looking out for the well-being and safety of others is an operational commitment for employees of EPC-UK. Hearing of Grant’s decision to further extend his personal ethos to life outside the working environment is praiseworthy indeed, and we wish him every success and continued safety as he realises his Ferryside Lifeboat role.”

“It’s terrific to have the support of my work colleagues regarding this recent Ferryside Lifeboat venture,” Grant concludes, “and I hope my commitment to our lifesaving team will prove beneficial.”